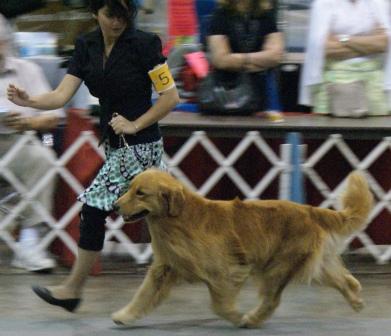 Conformation is the judging of a dog based on it’s adherence to the Breed Standard.   It is subjective in that one judge may interpret the standard differently than another judge with regards to any one dog.  In order to be eligible for Conformation events, a dog must be at least 6 months old and must be ‘intact’ as in not spayed or neutered.  In addition, only dogs with AKC Full Registration are eligible to compete in Conformation events.

A dog is examined first on a “stack” which is when the owner or handler places the dog’s legs in a standing position and the judge using his/her hands “goes” over the dog and is essentially taking measurements of each component of the dog’s anatomy.  After that, the judge will ask that the dog be “moved”, as in gaiting in a specific pattern in the ring.  There is the typical “down and back” or “triangle” pattern where the judge is looking at how the dog moves coming at the judge or going away from the judge.  The judge then will have the dog gait around the perimeter of the ring to watch the dog’s movement on the side, known as “sidegait”.

After all the dogs in their respective classes have been examined and moved, the judge will then “place” the dogs that he/she believes deserves a placement in that class.  There are four placements in each individual class.  When each individual class has been examined, the 1st place winner from each class goes back in the ring and the judge then chooses which dog will receive the Champion point(s) for that particular sex of dog.  Dogs (male) classes are all judged first and Champion point(s) awarded for the males, followed by Bitch (female) classes being judged and Champion point(s) awarded for the females.

In order to become a Champion, a dog must earn 15 points including two Majors (which can be 3, 4 or 5 points each).  The major wins must be awarded by 2 different judges at separate shows.  The AKC determines how many of each breed of dog it takes to have a “major” win as well as how many Champion points are awarded at any given show based upon the number of Golden Retrievers being shown.

Golden Retrievers have one of the highest entry requirements in AKC for points.   Golden Retrievers are one of the most competitive breeds in the Conformation show ring in AKC.  The majority of the dogs are exhibited by Professional Handlers in the Conformation Ring and it would be our opinion and that of many other exhibitors that ‘politics’ can also affect the outcome of who is awarded the Championship points, Best Of Breed, Group Placements or Best In Show at any given show.

Obedience trials feature dogs that have been trained to behave themselves at home, in public and in the company of other dogs.  This training enables their owners to enjoy their dog’s companionship and also gives them the ability to earn AKC titles should they chose to do so.  There are 3 levels of competition within AKC Obedience: Novice, Open and Utility. There is also is a title that can be earned as long as the dog has some basic knowledge of obedience commands and demonstrates those skills.  This title is referred to CGC (Canine Good Citizen).

Novice Class demonstrates Heeling at different speeds both on and off leash, and a Figure 8 on leash.  These exercises show if the dog has learned to watch its owner and adjust its speed to stay with its owner.  A  Recall  (coming when called) shows the ability of the owner to call the dog and get an immediate response.  You want your dog to come to you when you call it!  Standing for Examination is where the dog must stand still while the judge examines the dog with their hands.  This exercise is especially beneficial when taking the dog to the Vet to be examined.  Those exercises are done individually, one dog at a time in the ring.  In addition, two other exercises are done with a group of dogs lined up in a row in the ring which are the Sit Stay for one minute in which the dog must sit, and the Down Stay where the dog must stay in a down position for 3 minutes.  Those exercises allow the owner to have control of the dog when visitors come to the house.  Dogs earn their AKC Companion Dog (CD) title after receiving a qualifying score under three different judges.  Owners typically train their own dogs but ‘handlers’ are also allowed to train and get a title on a dog that they do not own.

Open Class has more complicated exercises are more are done off leash, there are retrieving and jumping exercises added, and commands are followed either by voice or signals.  Hell Free and Figure 8 are the same as Novice but now off leash.  Newly added to this class are Drop On Reall, Retriever On Flat, Retriever Over High Jump, and Broad Jump.  Now we have Long Sit for 3 minutes which is a longer time period where the owner must leave the room to be out of sight and there is also the Long Down for 5 minutes where the dog must remain in a down position.  Dogs earn their AKC Companion Dog Excellent (CDX) title after receiving a qualifying score under three different judges.  Again, owners typically train their own dogs but ‘handlers’ are also allowed to train and get a title on a dog that they do not own.

Utility Class is the third and highest level of obedience competition.

Agility trials feature dogs that have been trained and are tested on their ability to complete an obstacle course. The dog must work very well as part of a team with the handler in order to take all of the correct obstacles at full speed .  The handler must be in control of the dog at all times, and often the handler and dog have completed extensive obedience training prior to beginning their agility training and competition. This training also enables their owners to enjoy their dog’s companionship and also gives them the ability to earn AKC titles should they chose to do so.

There are essentially 4 levels of competition in AKC Agility, Novice, Open, Excellent and Master. There are many titles to be earned in Agility. Some of those include: NA, NAJ, OA, OAJ, AX, AXJ, MX, MXJ, MACH and ADHF.

There are many test / trials for dogs and handlers to compete that collectively fall under the category of field training / testing.  Essentially these venues allow the dog to demonstrate the retriever’s natural instinct as a hunting companion and retriever of birds.

The dog is tested on their ability to mark where the bird drops after being shot and their ability to retrieve the bird(s) directly to the hunter (handler) and then be ready to repeat the performance with another retrieve.  The dog is expected to perform the retrieves on various surfaces, including water (lakes) and land (rough and brushy terrain).

There are many titles to be earned in Field Work. Some of those include: JH, SH, MH, WC, WCX, FCH and AFC.

Rally was created to make obedience more fun.   It might be called informal obedience.  The requirements are easier than obedience, but tougher than the CGC.   A course is created with basic signs that dictate the command and activity / skill to be performed at that station.

There are 3 basic levels: Novice, Advanced and Excellent. As the levels increase, additional, slightly tougher signs are added to the course.   Novice has 31 different signs that may be used at any level.  Only about 16 – 18 signs are used on any course.  Unlike formal obedience, you may talk the entire time to your dog.  This makes it more fun for your dog because you are constantly interacting with your voice.

The Rally titles are: RN, RA RE and RAE.

This tests the dog’s ability to follow a track (i.e. scenting). Basically, the dog is given a starting point and a direction, and must pick up the scent at the starting point of an individual that walked the same track between 30 min and 2 hours ago.  The track is about 440 yards long with a glove or article at the end that the dog must locate.

The Tracking titles are: TD, TDX, VST and CT.